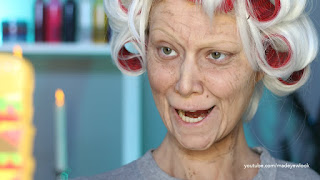 I wouldn’t be young again if you paid me many thousands of dollars.  Okay, if you offered me millions of dollars, I would indeed go back to my dentist and have him put the silver metal braces back on my teeth, but I would ask for a million per year (I had to wear them for four years!).  I’ve heard that young’uns now-a-days have to wear them for about a week, and they can pick purple if they want to.  Injustice number one.

You can tell I’m a senior because I’ve already used the term, now-a-days.  Isn’t that pathetic? I didn’t realize it until I re-read that first paragraph.  Those terms come out of my mouth without my brain even knowing it.  When those expressions escape my lips, the knowingness that I am becoming my mother sends shivers up my bent spine.  Injustice number two.

Now that I’ve re-read the second paragraph, I’m not sounding too happy about my age now, am I?  But, really...would you be thirteen again...EVER?  I grew EIGHT inches in my thirteenth year.  By that summer, my little friends came up to my waist.  I felt like the Empire State Building surrounded by a sea of three-floor, brownstone walk-ups.  My legs were 4’9” long and my neck comprised the other foot bringing my adolescent frame to 5’9”.  Injustice numbers three through twelve.

When you become a senior you just have to trade some things.  You trade a turkey waddle for empowerment, waist-level bosoms for the sense of humor you always wished you had, and spider veins for the balls, I mean courage you’ve shown as a senior woman.  God is funny like that, isn’t she?  She gives and takes, and I think she must be REALLY old, don’t you?

Oh.  I’d devote this paragraph to senior sex, but I have nothing to report.  And, I’m not even sure that’s an injustice.

Yes, that old saying is so true.  Youth is wasted on the young.  That’s because they’re stupid.  You don’t get smart until you’re in your forties.  That is unless by then you got paranoid schizophrenia, accidentally went deaf and dumb, or married Donald Trump. Be that as it may, wisdom is wasted on the young.  We invented Dairy Queen, free sex, and peasant blouses.  We think The Secret is real and that the world will end, so who cares about how smart you are?  Really.  We only have about three years here to have some fun and max out our Citi Cards.

I guess I wouldn’t mind being young again as long as I can still know what I know now. When I was young I thought all grown-ups were smarter than I was just because they were older and had a cocktail in their hand.  Now I’m the older person with a cocktail in my hand and I’m just now figuring things out.  It took me 69 years to figure out that you have to do what your heart tells you to do and you can’t get spilled fingernail polish out of the carpet no matter what you do.

I know now that the young people of today don’t want to hear anything we seniors have to say.  They don’t’ want to listen to our well-learned lessons because they think we are relics who don’t know the first thing about Twitter, Facebook, or MySpace.  That’s good, because secretly we are taking over the internet and learning how to use it to rid the world of texting, a Hanna Montana reboot, and Japanese computer-generated avatars with big, huge eyes.  You can thank us for that one later.

And won’t you be surprised when suddenly the most important demographic becomes 60 to 80 years old instead of 18 to 24.  All programming, ads and products will be aimed at us and ‘90210-2.0’ will go off the air in favor of…’The Kominski Method’!!! So learn all your lessons yourselves, you young punks.  You’re on your own.

SalGal
Posted by The Midlife Gals at 4:01 PM