We fixed The Ancient One up with a date...which DID NOT go well!
We miss you, Deedles!
Posted by The Midlife Gals at 4:17 PM No comments:

Left vs Right...The Twain Should Meet! 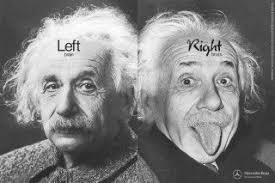 Definition Right Brain vs. Left Brain
“This theory of the structure and functions of the mind suggests that the two different sides of the brain control two different “modes” of thinking. It also suggests that each of us prefers one mode over the other.”
This just explains SO much about the difference between SalGal and me.  I do suspicion that Albert Einstein had a twisted balance between the two lobes or he wouldn’t have this sensibility:
Einstein Funny Quotes:

Two things are infinite: the universe and human stupidity; and I'm not sure about the universe.
The secret to creativity is knowing how to hide your sources.
Common sense is the collection of prejudices acquired by age eighteen.
In order to form an immaculate member of a flock of sheep one must, above all, be a sheep.
Insanity: doing the same thing over and over again and expecting different results.
Technological progress is like an axe in the hands of a pathological criminal.
The devil has put a penalty on all things we enjoy in life. Either we suffer in health or we suffer in soul or we get fat.
******************************
Sally and I form one perfect whole...okay...an imperfect whole, but that’s another story.  She lives in a mansion on the water on a different planet most of the year.  When called back to my left-brain world in order to complete some analytical project that I’ve given her...she brings a small carry-on bag.  She doesn’t like to stay too long.  I can’t blame her, because there is a teensy-weensy segment of my brain that travels to-and-fro my own right-brained planet, especially when I’m telling a story...I can get very carried away.
God had such a great sense of humor when forming these two lobes of our brains.  No wonder she had to rest on the seventh day, week, year...whatEVER.  I’m too pragmatic to believe in an actual figure called God.  When I see the stars and planets at night, I know that I am but an infinitesimal ‘ash’ spewed from a forming galaxy.  It’s both a comforting, yet unsettling notion that reminds me of a greater power, but not someone in a toga with long, white hair.  Seriously?  That’s all we could come up with visually for the essence of love?
I’m getting off track here because sometimes I write while I’m plotting my circular route that will take me through the six errands I have to run and home again within the time parameter I have set for myself.  At the end of a day, over a martini, I discuss the successes of my day and all of the things I accomplished, which are usually legion because I’m organized, ok?  Then, I pamper myself by watching shows on the ‘Crime and Investigation’ channel:  Manhunters (US Marshals chasing bad guys all over the country), Food channel: Iron Chef America (a frantic yet highly-organized contest between two chefs to prepare the perfect meal within a one-hour time frame), NBC: Jeopardy (we all know how left brain Alex Trebec is, and to really let loose, I’ll watch Project Runway (creative, right-brainers also frantically working toward making a single garment within a very strict time frame).  There is a disturbing pattern that I’ve just discovered after ‘crafting’ this paragraph.
THERE IS NO HOPE FOR ME!!!!!!!
KK
************************************
Well, I have to admit that KK is right about everything.  She has a good hold on her left brain, analytical, organized ways of looking at the day, while I bumblefuck my way through projects like a monkey in a costume shop.  I may decide to put the pants on my head and use a beret as a codpiece, but I do end up with an appropriate wardrobe in the end.  I just need KK to tell me how to wear it.  “Do these yellow socks go with this red and gold gypsy scarf?”  She shakes her head and goes to her closet for some more presentable garb for me, as she balances her checkbook and programs the DVR for daily recordings of ‘SWAT/Aida,Oklahama’ on the way to her closet.

I get things done, dammit.  I do.  But if I’m on a mission to go to Costco for some kitty litter and olives, and I see a rainbow over the canal, I’m going to pull over and enjoy the show.  And if I see a garage sale on Kahala Street with giant conch shells visible on the grass and candles in the shape of mermaids, well, Costco can wait.

I would really like to have a perfectly organized life but things just get in the way of my plans.  If I’m in my left brain for too long a period of time, I get petulant and I have to take a nap and then eat M&M’s as soon as I wake up.  I don’t know why….

KK, on the other hand, needs to know why for everything.  “Why can’t you see that the bank is on the way to Costco and to go that way so you can kill of two birds with one stone?”

“Oh, KK, that is so cruel.  Those birds never hurt anyone and just because they shit on your car windshield is no reason to plot their deaths by stoning.”

You see what I have to put up with?  We just don’t think alike.  Our conversations over Martinis today will be interesting as usual.  Things she accomplished, things I forgot to do because I saw an albino cat in a window on our street and had to stop and take a picture of it on my I-Phone so I could post it on my facebook page…but I digress again.

She will understand, as long as it’s a double shot of vodka that flips her into her right brain...that there are no olives in our ‘Teenees’ today because I never made it to Costco.

SalGal
Posted by The Midlife Gals at 1:07 PM No comments: