Things The Royals Don't Get to Do or Have 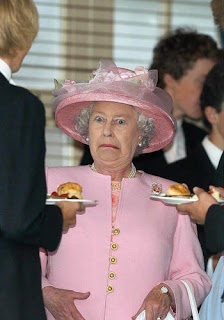 Apparently the Royals don’t get to sleep in.  There seems to always be someone ‘in waiting’ to assist them, and everyone is on a tight shedjule.  The dressers have to get them ready.  I’ll bet dollars to donuts the Queen does not own a pair of jeans.  That’s a shame, and we feel sorry for her.  Elizabeth is of the panty hose generation (thank God that’s over).  And, I’m fairly certain that the royal closets do not contain an exercise outfit for her either.  No lilac, polyester leisure suit in which to lounge around the palace. I’ll bet she still wears a girdle.

Because we long ago won our independence from the British Empire, I am able to say all these tacky things about the Queen.  The Brits say some pretty tacky things too, so I’m in good company.  It’s just that I wonder about things like this, I mean, when I’m not thinking lofty, sophisticated, intelligent thoughts, which takes up my mornings, but then leaves me all afternoon to ponder the trivial...like whether Prince Philip wear boxers or briefs...briefs on Prince Philip..ROTFLMAO!!

Does the Queen have a Lazy-Boy recliner with the feet that come up and pockets on the sides where she can keep royal documents to work on during Wheel of Fortune (if they get that show in the UK, I don’t know).  Do the royal ladies do their own makeup?  Probably, because every one of them could use serious make overs.  Not Kate though.

Well, that was fun.  Just pondering things that make the world more interesting for me.  It’s pretty interesting already, but wouldn’t you like to dumpster dive at Buckingham Palace just to see what’s going on in there??????

Cheerio
KK
*********************************
Can the royals have simple pleasures?  Do they even have a front porch?  Do the young couples from the neighborhood push their babies by in Belgian Laced prams trimmed with satin bows and studded with pearls?  Do the royals sit there with their perfect martinis in hand and diss the Euro-trash, hoarders who live in the castle down the dale?  Never mind that it is the Prince of Monaco and the hoard is a pile of marble statues of Roman Gods piled next to the freezer in the 12-car garage.  Still tacky.

I’ll bet you some crispy oysters at The Four Seasons that none of the royals have ever taken a plastic spoon and dived into a greasy Frito Pie, yes, still in the Frito package and dripping with cheese.  Poor things, bless their hearts, they are deprived.

KK and I are going to meet a friend for Happy Hour at our favorite, little French restaurant downtown on Friday.  All we have to do is put on some cool jewelry, retouch our ‘J-Lo Sparkles-Are-Good-Bronzer’, and walk out the door.  We don’t have to wait for the security team to clear the restaurant, and the five-hundred-thousand-dollar sapphire necklace and matching bracelet to be brought down from the vault in the Tower of London so that we can wear that royal blue, brushed silk cocktail dress that was delivered from the showroom at the Chanel store. God forbid that they would have to go amongst the riffraff to actually shop for clothes.  The royals can’t go shopping without the paparazzi finding out what size their bras and panties are and broadcasting that info on the Naked News channel that night.

I’ll bet the royals don’t even know what the two-step is…or how a good batch of popcorn at the local movie theater is when it falls out hot and salty from the popper.  They must have to rely on Netflix.  Can you imagine what they would have to go through just to slip out to the movies and see the latest Vin Diesel movie?


SalGal
Posted by The Midlife Gals at 1:26 PM No comments: