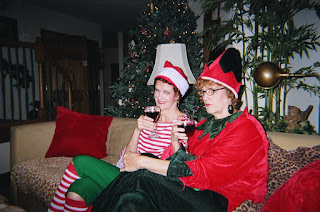 I put a scary witch and some spiders on the door for Halloween.  KK told me I was really lame, but she doesn’t’ understand how much fun it is to scare little kids.  I wish we could scare little kids at Thanksgiving too, but I’ll just have to settle for a pumpkin by the front door.  Decorations are a must for all holidays, as Honoluluans needs to uphold their reputation for obsessive-holiday-compulsions, and all of her denizens must contribute to this tradition.  Any kind of yard-art or door-wreath plasticity is highly encouraged by the population of this city.  Televisions perched in trees are a mainstay for Christmas decorations and if yours actually turns on, you are considered a genius.

I look forward to Christmas and all of its good cheer and fake snow in the windows downtown.  Of course, people in Honolulu go all out to celebrate the birth of Jesus, and Santa Claus seems to embody this festivity more than nativity scenes on the lawns or even lit-up Queen Liliuokalani candles in the windows.  I hate Santa Claus…mainly because I sat in the lap of one when I was about three years old and his stale, smokey, bourbon breath almost knocked me into the fake bag of presents by the elf.  Even worse than that though was the fact that he had black stubble under his white beard, and then he handed me a scary doll that made me think of my best friend’s mother.  That was not good.  My best friend’s mother looked like Ed Sullivan.

But I digress.  I need to go into the decoration box and pull out the three-foot-tall papier mache monk holding the cornucopia overflowing with gourds and berries, and put the Christmas lights around him and put him by the door

so people can see how involved we are in the holiday spirit.  Then I ‘m going to go hide in a box and lick my cat’s head.

SalGal
Posted by The Midlife Gals at 1:27 PM No comments: